Armchair Book Review - Faith Alone: The Heart of Everything

Did Bo Giertz write a better novel than Hammer of God? 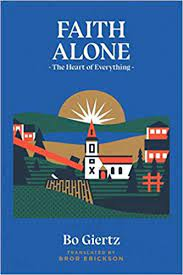 That's kind of how I felt after reading Faith Alone: The Heart of Everything. The jury is still out on whether it is truly better (Hammer is on my reading list for this summer, so we'll see how I feel after a reread), but any fan of Giertz's most famous work (one of Sweden's all-time best sellers and without a doubt the most well known of his works available in English) should pick up the latest of his works brought into English by translator Bror Erickson (here's a quick link for your convenience). *Fun Fact: years ago Bror commented on my blog when I offered a rough translation of Giertz's transfiguration day chapter from With My Own Eyes, sharing his plans to make that work available in English again which he eventually did.

Coming back to Faith Alone, the book features a lot of what I love (and even some of what I hate) from Hammer of God. Starting with the one big negative for me with both books is that they are kind of slow reads, and suffer from exceptionally long chapters. Indeed, though the book is 271 pages in length, it only features 6 chapters! I'm one who tends to like reading breaks, and I like to take them at good break points, chapters being my preferred book-mark. That really doesn't work here. In Giertz's defense, each chapter really works as a cohesive whole, usually happening in a single day. But UFF-DA. I remember having the same issue with Hammer.

More positively, like Giertz's other masterpiece, Faith Alone features similar characters: main characters (including clergy) who still have much to discover of the law and gospel, pastors who are true Seelsorgers, people who practice extreme piety as a solution to the apparent faithlessness of the mainline church. In some ways, what happens is so familiar it is really the same story just told in a different context.

The context though is one of the gifts of Faith Alone, set in Sweden in the years 1542-43, the story unfolds in the early years of the Swedish Reformation. This context sets the story apart from Hammer especially in how alive Giertz makes it. The story follows two brothers, Anders/Andreas and Martin. One a devout Catholic priest, the other an evangelical (Lutheran) Scrivener for the king. Giertz does a masterful job of bringing these two brothers to life and showing in living color their respective faiths. And yet, as he has in Hammer, also showing what is lacking in these living faiths, namely, showing what is lacking when we try to give life to our own faith. Giertz's style of expressing the Christian life as spiritual impoverishment by which God's gospel can speak runs through this novel, particularly it's second half. It is that spiritual journey which makes this feel a lot like Hammer.

And yet those familiar with Giertz's novel The Knights of Rhodes will also find familiarities. Like Rhodes, this book is set in a specific historical context and also has themes that explore faith in the midst of ruin. Hammer of God has been said to be a great novel regarding Law and Gospel, while Knights of Rhodes explores Theology of the Cross. Faith Alone explores both. One might argue the others do a better job in their respective categories (Hammer has often been used as a seminary textbook even), but this book gives wonderfully explores both. It also is a wonderful book regarding the teaching of justification by faith alone (obviously) but also the Lutheran concept of Two Kingdoms.

It is this two kingdoms element that also helps give life to the story. Set in the midst of a rebellion within the land, at times the two brothers are not only coming from different faith traditions, but also from different sides of the unrest (think brothers in an American Civil War context). Because of this, and because the story is ultimately about both brothers' spiritual discovery of the gospel, everything feels gray as it often does in life. You never have the "good guys" and "bad guys", you have two brothers caught up in a real mess where sin taints everything and it's not as simple as fight for the right side. In fact that is part of the point, it's never simply about the right side, deed, or correction. This grayness, and ability to show plainly and bluntly the characters (both main and supporting), without having to hold back any faults gives the book a distinct sense of reality you rarely find in novels.

Compared to past novels of Giertz brought to English, I must admit the editing on this first edition was poor and the reading experience suffered multiple times from noticeable mistakes. But there were also improvements. A former professor of mine, Mark Granquist, provides a helpful historical introduction that helps one have a better sense of Swedish history and where exactly you are in it when you open the book. Erickson also provides throughout the novel a series of footnotes when odd/unique Swedish terms are used, or to translate the Latin spoken/prayed. I found these footnotes helpful and inciteful.

I began by saying this book may be better than Hammer of God, and one of the things I especially liked more than Hammer was that this was one consistent story rather than three different novellas. The novellas in Hammer are their own kind of gift, allowing the book to cover more ways the gospel has been suppressed in the church. They also, by taking place in the same area over a stretch of years leave the churches as the tie throughout, a beautiful concept in its own right. Instead Giertz covers his variety of issues in Faith Alone by following two characters throughout the same events. This is I think more effective and familiar and invests you in the story more. He does a better job here of connecting you to the characters than in Rhodes by having far fewer characters overall. The story is also more compelling and interesting than in Hammer. And like Rhodes, it has parts that would appeal even to people uninterested in religious fiction (though Rhodes is better as a book for offering theology subtilty, as the title here suggests, there is a significant focus on matters of faith here). It's a story people would want to hear about. And this again helps invest you in the characters. As I've said over and over, the context of this story is one of its gifts.

As I have with Hammer, this book left me thinking about what contexts is could be used as a teaching tool. Confirmation? Reformation History? It's a very powerful way to express the heart of Lutheran theology and why in our theology faith alone is (as the title says) "The Heart of Everything".

Click here for a quick link to order Hammer of God